About a year ago, history buffs across the world were wildly excited by the report of a 7th century CE Buddhist rock-cut sculpture in Pakistan’s Swat valley being restored. Destroyed by the Taliban in 2007, the restoration was conducted and funded by the Italian government. While sharing the joy at the restoration of this Buddha figure, many Indians tend to overlook the presence of equally iconic sites in the heart of our own country. (Ref: https://tinyurl.com/swatbuddha)

One such site lies close to the heritage town of Chanderi in Ashok Nagar district. The place isn’t easy to reach. Gadelna, a nearby village, is the closest landmark from where helpful locals can point a visitor in the right direction, or sometimes even accompany you to the site. About twenty-five kilometres from Chanderi, the road gets a bit rutty and enters a small hill-complex. A visitor is surrounded by thick vegetation. The Urr River is close by. A short uphill walk reveals the object of the exploration: a wide ledge on the hillside.

Built into a cleft on the wall of this ledge is a massive Jain Tirthankara. A depiction that is unusual not just for the remoteness of its location, but also for the fine lines carved on rock. What makes the carving special is that it does not depict the Tirthankara as an emaciated ascetic, as many Jain and Buddhist representations tend to be, but as a muscular figure seated in meditative posture. The face, lit-up by a half-smile, is topped by a crown – unusual for a figure that depicts someone who has renounced the world. This well-built figure, with his crown, has led locals to naming the place Bhimsen-ki-gufa. The dimensions and posture of the Jain figure are like the one at Swat. 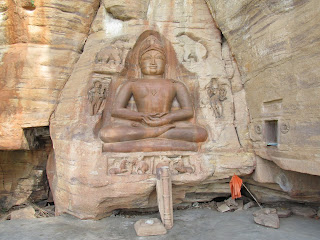 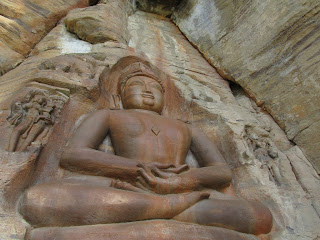 Carved in stone around the sitting figure are fighting lions, elephants and celestial figures. A lengthy inscription on the ledge-wall mentions a date which corresponds to 942 CE and names a ruler called Vinayakpal. Apart from the stone Tirthankara, the ledge is home to an entire legion of Hindu figures also, many of which predate the Jain figure. Prime among these is a set of striking depictions of the Holy Trinity of Hinduism – Brahma, Shiva and Vishnu, the last one in the Varaha (boar) incarnation. 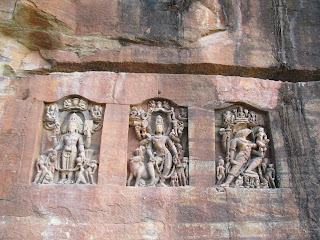 There are also a set of Uma-Maheshwar depictions, some of which have eroded with time. Some of the depictions could date to the Chandella period around the 10th century CE while others seem even older. Could the tranquil ledge have been a place of worship across the ages? That’s a question to which we don’t have a definite answer but there is enough evidence to indicate the antiquity of the site. Move over, Swat-watchers, this is India at its finest!

About a year ago, history buffs across the world were wildly excited by the report of a 7 th century CE Buddhist rock-cut sculpture in P...